Would you like to switch to the accessible version of this site?

Don't need the accessible version of this site?

Many people don't realize they have a fungal nail problem. Moreover, many do don't seek treatment. Still, fungal toenail infections are a common foot health problem.

Such infections can persist for years without ever causing pain. The disease, characterized by a change in a toenail's color, is often considered nothing more than a mere blemish, but it can present serious problems if left untreated.

A group of fungi called dermophytes easily attack the nail, thriving off keratin, the nail's protein substance. When the tiny organisms take hold, the nail may become thicker, yellowish-brown or darker in color, and foul smelling. Debris may collect beneath the nail plate, white marks frequently appear on the nail plate, and the infection is capable of spreading to other toenails, the skin, or even the fingernails.

Nail bed injury may make the nail more susceptible to all types of infection including fungal infection. Those who suffer chronic diseases such as diabetes, circulatory problems, or immune-deficiency conditions, are especially prone to fungal nails. Other contributory factors may be a history of Athlete's foot and excessive perspiration.

Depending on the type of infection you have, over-the-counter liquid antifungal agents, while sometimes effective, may not prevent a fungal infection from recurring. A topical or oral medication may need to be prescribed, and the diseased nail matter and debris removed by a process called debridement.

In some cases, surgical treatment is prescribed during which the infected nail is removed. Permanent removal of a chronically painful nail, which has not responded to any other treatment, permits the fungal infection to be cured and prevents the return of a deformed nail. 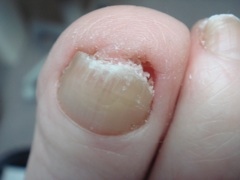 We look forward to hearing from you!

Find us on the map